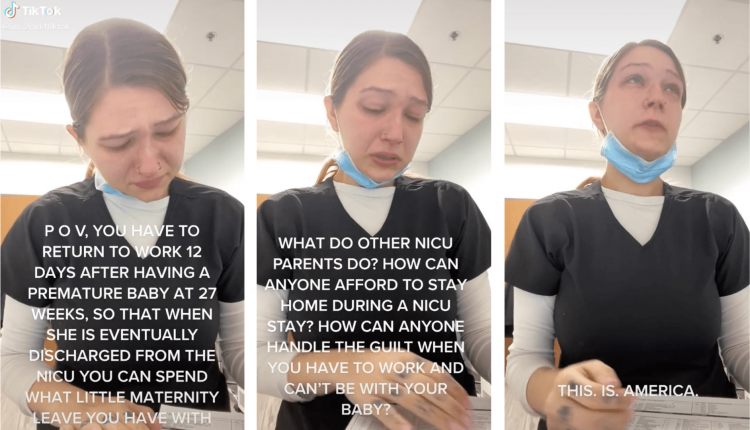 In the US, many parents return to work after giving birth before they are ready – emotionally, physically and mentally. But in the US, many parents don’t have a choice. In a country without mandatory paid family leave, many are unable to take time off, regardless of their situation. A mom recently shared her heartbreaking situation in a TikTok that quickly went viral.

Last month, Rebecca Shumard returned to work just 12 days after the birth of her daughter, who was treated in the NICU after she was born at just 27 weeks old. Shumard, who is still physically recovering and an emotional wreck, hired herself as a medical assistant on her first day on the job.

“POV, you have to return to work 12 days after the birth of a preterm baby at 27 weeks so that when she is eventually discharged from the NICU you can spend what little maternity leave you have with her,” Shumard wrote in the Video.

The reality of leaving the hospital without your baby is brutal enough, but mothers in NICUs are often forced to rush back to work so they can take shortened maternity leave when their baby comes home. Like many mothers in the NICU, Shumard tried pumping every few hours to feed a baby she couldn’t directly feed herself. For many breastfeeding parents, pumping alone is not enough to stimulate milk production into an adequate supply.

“They try to pump every three hours at work but they are understaffed. Their milk production decreases eight weeks after birth. Do you even have milk on hand for when she comes home?” She continued.

In Shumard’s situation, many mothers take bare necessities on days off to recover for a short time physically before going back to work. When their baby finally comes home, they can use the remaining time – usually less than the 6-8 weeks originally offered by their employer at that point, often unpaid or with reduced pay – to be with their baby.

“What are other NICU parents doing? How can someone afford to stay at home during a stay in the NICU? How does someone deal with guilt when you have to work and you can’t be with your baby? This. Is. America.”

In short, this experience is a nightmare. And it’s an all-too-common nightmare for many families across the country, and it’s disproportionately affecting low-income households. Having a premature baby in the NICU is scary and stressful enough having to return to work while still physically restricted from the birth, on top of the mental anguish of all of the above, well it’s just too much for Parents. And yet they do it over and over again because the US government offers absolutely no options.

Currently the only leave protected by the state is unpaid family leave – the Family and Medical Leave Act (FMLA). Parents can take up to 12 weeks of unpaid family leave for the birth, adoption or care of a child. But only if they work in a company with 50 or more employees. Did I mention it’s unpaid? So sure, you can take a full three months off. But you will be financially penalized for it.

Thanks to Shumard’s viral video, the TikTok community has raised enough money to take FMLA to her little girl for the rest of her stay in the NICU.

Before any of this can go into effect, it must be passed by the Senate. They are now officially deliberating on the bill.

All of this and many other real life reasons are why paid vacation is not an advantage. It should be a right of every American parent.