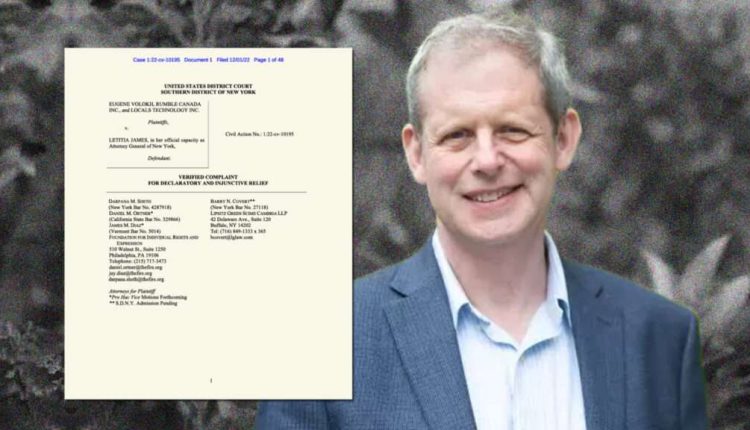 In New York, websites and apps are required to have a plan to address “hateful conduct” on their platforms. A new lawsuit is seeking to change that.

On Thursday, the Foundation for Individual Rights and Expression (FIRE) filed a lawsuit on behalf of two online platforms, Rumble and Locals, as well as Eugene Volokh, a UCLA law professor who runs the blog The Volokh Conspiracy (which is hosted by Reason .) FIRE claims that a New York law mandating that online platforms provide mechanisms for reporting “hateful” speech violates the First Amendment.

“The state of New York can’t turn bloggers into Big Brother, but it’s trying to do just that,” said FIRE attorney Daniel Ortner said in a Thursday press release. “The government can’t burden online expression protected by the Constitution, whether it’s doing it in the name of combating hate or any other sentiment.”

In June, Democratic New York Gov. Kathy Hochul signed into law a bill, “Social Media Networks; Hateful Conduct Prohibited,” intended to curb online hateful speech. The law amends existing business regulations to require that broadly defined social media networks provide a mechanism for users to report instances of “hateful conduct” and publish a policy for how it will “respond and address” the reports.

The law defines “hateful conduct” as “the use of a social media network to vilify, humiliate, or incite violence against a group or a class of persons on the basis of race, color, religion, ethnicity, national origin, disability, sex , sexual orientation, gender identity or gender expression.” Platforms that fail to comply with the law can face fines of up to $1000 per day of violation.

FIRE argues that the law violates the First Amendment in four ways. First, it argues that the law compels the speech of social media platforms by requiring that they publish hate speech policies. Second, it argues the law imposes unconstitutional viewpoint discrimination by singling out speech that is “hateful” on the basis of several protected classes for moderation. Third, FIRE claims that the law is overly broad “because it pressures online services to chill, prohibit, or remove a substantial amount of constitutionally protected online speech and compels them to voice the state’s pro-censorship view.”

Further, FIRE argues that the law is vague and that vagueness coupled with an official statement from New York’s governor insisting that the law requires companies to “monitor and report hateful conduct” leads platforms to “reasonably believe that the Online Hate Speech Law will be expansively interpreted and aggressively enforced…unconstitutionally incentivizing them to chill speech on their platform and compelling them to parrot the state’s message in order to avoid investigation and civil penalties.”

However, the law contains a provision that seems attempts to protect itself from coming under fire for violating the First Amendment, clarifying that the statute does not order social media networks to violate the “rights or freedoms of any persons, such as exercising the right of free speech pursuant to the first amendment to the United States Constitution.” FIRE is unconvinced by the provision, arguing that the clause is far too vague.

“I don’t think that that savings clause really means anything,” Volokh tells Reason. “Our whole point is that the statute does adversely affect my constitutional rights by mandating that I set up a policy that I don’t want to set up, aimed at certain viewpoints that I don’t want to have to single out in a policy .”

It appears that New York politicians want to try to force social media companies to single out large swaths of disfavored speech for monitoring—and, thus, for regulation. However, such a scheme violates the constitutional rights of platforms to decline to moderate online speech that the state disfavors.

“The First Amendment protects speech regardless of the viewpoint that it expresses,” Volokh says, “and the reason why it protects the speech that each of us values ​​is precisely that it doesn’t let the government say ‘certain kinds of viewpoints can be suppressed.’ So, if you give the government the power to suppress some viewpoints, it’ll end up having the power to suppress other viewpoints, including viewpoints that you might like.”

A lot of the CDC Is Working Remotely. That May Make Altering the Company Troublesome.

BREAKING: Monetary Instances Studies UK Authorities Has Finalized Plans for Regulation of the … – Newest Tweet by The Spectator Index