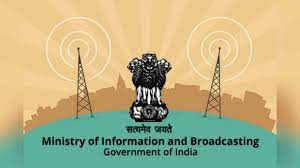 The Ministry of Information & Broadcasting (MIB) has asked nine TV channels to go off air for a specified period for violating programs and advertising codes between 2017 to 2022.

“During the years 2017 – 2022, nine (9) TV channels have been taken off-air for a specified time period for violation of the Program Code and Advertising Code,” I&B minister Anurag Thakur informed the Lok Sabha.

The minister stated that all private TV channels are required to adhere to the Programs and Advertising Code laid down under the Cable Television Networks (Regulation) Act, 1995, and the Rules framed thereunder. Appropriate action is taken whenever a violation of these codes is found, he added.

He also informed that the MIB has issued directions for blocking 94 YouTube-based news channels and 19 social media accounts/websites/mobile applications under the Information Technology (Intermediary Guidelines and Digital Media Ethics Code) Rules, 2021 during 2021-22.

Thakur also stated that the CBFC has refused certification to 11 songs between 2017 and 2022.

The Digital Media Ethics Code Rules, 2021, and the Cable Television Networks (Amendment) Rules 2021 have been challenged in various high courts, however, the matter is now before the Supreme Court.

“Several petitions have been filed in High courts of Delhi, Odisha, Kerala, Karnataka, Madras, Calcutta, Bombay, and the Supreme Court challenging these Rules. The same are being heard by the Supreme Court,” he added.

Thakur stated that the orders issued by the Government under the Cable Television Networks (Regulation) Act, 1995 and the rules framed thereunder and the Information Technology (Intermediary Guidelines and Digital Media Ethics Code) Rules, 2021, serve as deterrence in ensuring compliance to the extant laws.