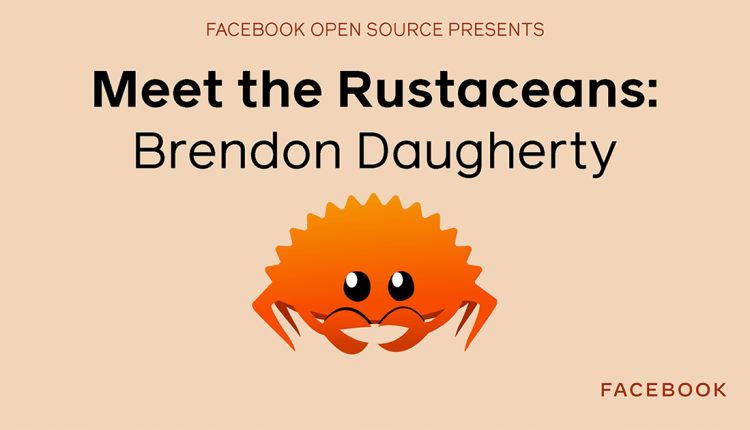 This article was written in collaboration with Brendon Daugherty, a production engineer at Facebook.

For today’s interview, we have Brendon Daugherty, a production engineer on the IaaS (Infrastructure as a Service) resource team at Facebook. The IaaS team is working on developing tools and systems to better manage Facebook’s infrastructure on a large scale. While working on this team, Brendon used Rust as one of the main development languages. He mainly works on distributed systems, services and cron jobs. Let’s hear from him about his experience with Rust and learn more about his work.

Our team mainly writes Rust. Almost all of the code I wrote on Facebook was in Rust, including lots of command line tools, some distributed systems, and a few cron jobs.

My team mainly switched from Python to Rust for a couple of important reasons:

Almost every project I’ve worked on on Facebook has been in Rust:

I feel pretty good about it. More and more services are being written in Rust, and more tools are adding Rust support. We’re fortunate to have a thriving community of Rust developers here on Facebook and a strong Rust Foundation team who are helpful with both code reviews and learning about Rust.

I think Facebook does a great job when it comes to interoperability with C ++. CXX is amazing and made it a lot easier for me to use Rust as it integrates with existing C ++ libraries both inside and outside of Facebook.

I think Rust is growing the fastest in its community. With major improvements in lifespan and compiler, Rust is becoming more and more accessible. Because of this, more and more people are seeing how much easier programming can be when you have Rustc as a co-pilot. That way, people build better tools and the environment just keeps getting better.

My favorite feature of Rust is Rustc. When I started here on Facebook, I came to Rust and had written a lot of C ++. Originally I was worried that I would have to learn a completely new language, but what I didn’t realize was that despite 4 years of C ++ in school, I was actually more willing to write Rust than C ++. To write C ++ you have to be extremely careful. I wasn’t fully prepared to check my team’s code to look for hanging clues and undefined behavior.

Now that I’ve been using Rustc, not only have I written a lot of code that I know is safe, but I’ve also become a better programmer. The back and forth with Rustc has taught me to pay attention to how the data moves in my program, and when I am reviewing or writing Python code I am much more careful because I am not at the wheel of Rustc.

We thank Brendon for taking the time to do this interview. It was very interesting to see how Rust is used as the primary language for building tools and systems and how we learn from all the things we build here and contribute to the Rust community. We hope you found this interview helpful and it gave you some insight into how and where Rust is used on Facebook.

KHN’s ‘What the Well being?’: The Way forward for Public Well being