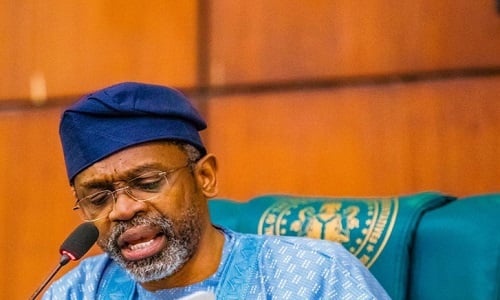 House spokeswoman Femi Gbajabiamila accused the media on Monday of opposing the regulation of their industry.

He spoke against the background of widespread protest by the print media against the law on media regulation being debated in the House of Representatives.

All of the major newspapers published the front page of the public notice on Monday entitled “Information Lockdown”.

Sponsored by the Nigeria Union of Journalists (NUJ), the Nigeria Guild of Editors (NGE) and the Newspaper Proprietors Association of Nigeria (NPAN) it carried the following words: “This is what the National Assembly wants to achieve with NPC and NBC” (media) Amendment laws.

“It’s not just about the media … it’s about society’s right to know, your right to be heard.”

Gbajabiamila, made aware of the NUJ Chairman FCT Council Emmanuel Ogbechie during a visit, started with a long talk on how institutions in the country avoid regulation.

“If you go to Section 45 of your Constitution, you will learn how the government can restrict this freedom for health and safety reasons, and it is written in black and white.

“For some it’s an instant response, some just jump on the bandwagon without knowing the details or problems. I will take this press council bill as an example.

“I called the proponent of the bill and asked him, ‘What’s going on?’ ‘What did you do and what is on that bill?’ He tried to resolve it. I haven’t read it myself and I admit that. But I will read it in detail in the next few days. I only have a rough idea of ​​the content.

“He told me that he had a meeting with everyone involved. I was not present at the meeting. He said what they wanted was not acceptable to him.

“No matter what regulations you have a problem with the bill; Whatever provisions are in this bill that are detrimental to the operation of the press, remove it and replace it with something else so that everyone is satisfied.

“As I understand it, it wasn’t about choking, but rather that they don’t want to be regulated. That worries me because it is so far in this country that nobody wants to be regulated anymore.

“Regulation is a central and essential element of good governance. We cannot allow every institution to run amok. The executive is regulated, the judiciary is regulated, and the legislature is regulated.

“You can’t hide behind freedom of expression to say that you can’t be regulated. I’ve seen marriages broken, I’ve seen businesses destroyed, I’ve ruined countries, and I’ve seen children hang themselves over the content of irresponsible information.

“We mustn’t be afraid to tell each other the truth. To be clear, I would like to stress that, as a spokesman, I will not allow any bill to silence the press. It’s not going to happen. There is a difference between regulation and choking. Let’s try to separate the two.

“I don’t know how you will feel if the legislature says they don’t want to be regulated. You will be the first to jump on us. Let’s rethink. Let’s take another look at the provisions of the bill and make sure that this bill has provisions that maintain the autonomy and independence of the press as this is non-negotiable.

The bill’s sponsor, Olusegun Odebunmi, told our correspondent that efforts would be made to further involve industry stakeholders in its provisions.

He said: “At the moment we are at the stage of involving the critical stakeholders in the draft law and at the end of the day all the reasons for the fear expressed will be resolved in such a way that the freedom of the press in our country will be resolved.”