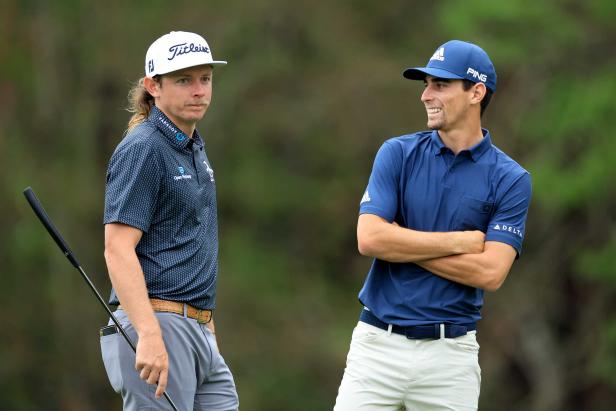 Cameron Smith’s jump to LIV Golf is official, as the World No. 2 will play in this week’s LIV International Series outside of Boston. He was one of six new signees announced on Tuesday.

The news was far from a surprise. Smith’s multiple non-denials about a possible defection to the Saudi-backed circuit since winning the Open Championship in July signaled the Aussie at least hadn’t ruled out a move. He was also one of the few stars who didn’t attend the players-only meeting during BMW Championship week. Multiple outlets also reported this weekend that Smith would be announced as LIV’s newest signee following the conclusion of the Tour Championship.

The get is a coup of sorts for LIV Golf. Whereas most of the players who have gone to the rival league tend to be 40-and-older, injury-prone or are rank-and-file names, Smith has undoubtedly been one of the best in the game in 2022. Before winning at St Andrews, he claimed the Players Championship title and finished T-3 at the Masters. Just as importantly, Smith is only 29 and should have a number of seasons left in his prime.

Joining Smith in departing from the PGA Tour and playing this week at The International in Bolton, Mass., are Joaquin Niemann, Marc Leishman, Harold Varner III, Cameron Tringale and Anirban Lahiri. (Tringale had announced he was going to LIV via social media on Sunday.)

Niemann also breaks the LIV stereotype, as he is just 23 and coming off his most successful year on the PGA Tour with a win at the Genesis Invitational and five top-10 finishes. “I haven’t made my decision yet,” Niemann said last Friday at the Tour Championship. “Obviously, there’s some things I’ve got to see first, but I’m not thinking about that right now. I want to finish the playoffs and then see what my decision will be.”

Leishman, 38, is a six-time PGA Tour winner, his last victory coming with Smith as a two-player team at the Zurich Classic in 2021. Lahiri, 35, has not won a PGA Tour event but does have 18 global victories and finished runner-up to Smith in March’s Players Championship. He is also the highest-ranked men’s pro golfer in India.

Varner, 32, could be seen as a surprise, given that he’s stated on multiple occasions he wasn’t going to LIV Golf. But he was the winner of February’s Saudi International and one of his good friends on tour, Bubba Watson, also has joined LIV.

Not among the names is Mito Pereira, who was cited in a Golf Channel report as a possible LIV signee. But on Saturday afternoon, the 27-year-old from Chile posted a picture of himself in an International Presidents Cup team uniform on his Instagram account and stated how honored he was to play in the competition. Any member of LIV is not allowed to play in the PGA Tour-run Presidents Cup, indicating—at least for the immediate future—Pereira will remain with the tour.

As soon as these six players tee it up on Friday in the LIV event, they will be suspended from the PGA Tour. That means Smith and Niemann—two of the eight automatic qualifiers for the International team—will be barred from the Presidents Cup competition being played in September at Quail Hollow Club.

“No,” Monahan said. “They’ve joined the LIV Golf Series, and they’ve made that commitment. For most of them, they’ve made multiyear commitments. As I’ve been clear throughout, every player has a choice, and I respect their choice, but they’ve made it. We’ve made ours. We’re going to continue to focus on the things that we control and get stronger and stronger. I think they understand that.” When a follow-up requested if there was any channel back to the tour for LIV Golf players, Monahan responded, “As it relates to any of the scenarios for LIV players and coming back, I’ll remind you that we’re in a lawsuit. They’ve sued us. I think talking about any hypotheticals at this point doesn’t make a lot of sense.”

Seven players, including Phil Mickelson and Bryson DeChambeau, have filed an antitrust lawsuit against the PGA Tour, with LIV Golf joining the case last week. A tentative date for summary judgment has been set for July 23, 2023, where the tour will likely seek to dismiss the case, with a trial date expected to begin on Jan. 8, 2024.