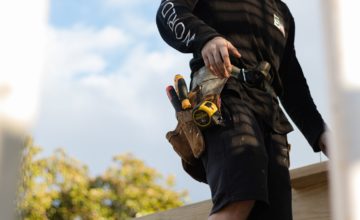 The Maine Legislature’s Committee on Innovation, Development, Economic Advancement and Business convened on February 22 to hold a public hearing on a bill that would create a mandatory state registration process for residential construction contractors.

Individual applicants would be required to provide their name, address, email address, telephone number, and employer identification number. Applications made on behalf of corporations, limited liability companies, and partnerships would also have to include information about the state in which incorporation paperwork was filed, as well as the year.

To register, applicants would also need to provide information about their website or social media used to promote their business. They would also need to provide the number of years they’ve been in business and provide information related to criminal convictions and bankruptcy petitions for the 10 years preceding the date on which they submit an application.

Additionally, applicants would have to provide information about workers’ compensation insurance and liability insurance, if they have any. They would also have to provide information about all professional and occupational licenses they have held in any jurisdiction for the 10 years preceding the date on which they submit an application. The bill only considers a licensee to be in good standing in another jurisdiction if they do not have a complaint, allegation, or investigation pending, or if their license has not been suspended or revoked.

The bill stipulates that registrations expire every year on January 31, meaning contractors would have to register annually. Registrants would be charged an annual fee of $150. Registration information would be available to the public on the Department of Professional and Financial Regulation’s (DPFR) website. The DPFR would also have to include a disclaimer alerting the public that information on registrants has not been verified and does not assure competence.

Failure to register would be considered a violation of the Maine Unfair Trade Practices Act.

The majority of testimony heard during the public hearing was in opposition to the bill.

Tim Wheaton, a resident of Yarmouth who had a bad personal experience with a contractor, tested in favor of the bill. Wheaton, according to his written testimony, lobbied for full occupational licensing for contractors in fall 2020.

“It’s completely illogical that virtually every trade that’s needed for home construction and improvement must be licensed, but somehow the person that hires those trades, hires these people, supervises them, pays them, doesn’t even have to register. It’s just illogical,” Wheaton said.

Wheaton stated that a low-cost registration program shouldn’t be a burden to contractors, as other trade professionals that work inside homes are required to be licensed and have to show proof of competency.

“If you believe that even a low cost simple registration process would somehow be a burden to entry or cause contractors to leave the business, then I suppose then logically you would say that you’re introducing legislation to do away with licensing for all those people who are actually working in your home. I just don’t believe there’s any factual proof to substantiate that,” Wheaton said.

He added that doing nothing about the problem of fraud among contractors could lead the public to think the legislature believes the “risk of tattoos or pedicures are somehow larger, more significant than the safety of our homes.”

Anne Head, the commissioner of the Department of Professional and Financial Regulation, tested against the bill on behalf of Gov. Janet Mills’ administration, as did Rep. Joel Stetkis (R-Canaan), who works as a self-employed residential contractor.

Asked by committee member Rep. John Andrews (R-Paris) if he thought the bill has the potential to raise operating costs for contractors, Stetkis said there was “no question” this was the case.

Head’s testimony focused on the growth of occupational licensing across the country over the past 60 years. According to Head, nearly 25% of workers in the country are now required to receive government approval to practice their chosen profession.

labor market and they make it harder for workers to relocate across state lines. Certain groups—including military spouses and families, immigrants with work authorization, people with criminal records, and unemployed and dislocated workers—are affected disproportionately by the requirements and variances of occupational licensing. These are the very groups that the

licensing statutes and rules to incorporate them into the workforce,” the commissioner said.

Head said the Mills administration opposes the bill because of concerns about how it would affect the price of homes.

“At a time when home prices are increasing exponentially, and labor is difficult to find and expensive, the Administration does not believe that it would be prudent public policy to make it more difficult and costly for the citizens of Maine to build and remodel their homes ,” Head added.

Head was asked by Rep. Valli Geiger (D-Rockland) about how the administration could oppose the bill when Maine’s attorney general has highlighted an increasing number of complaints related to fraud from builders.

Andrews asked Head to expand on “how license isn’t a cure all for sloppy work.”

Head said there is “absolutely no shortage of complaints against individual practitioners in any field that is currently regulated.”

“So a licensing program does not stop misconduct or poor work. That’s not happening,” she said.

“Very few boards revoke licenses, so I’m not sure that having a licensing program will stop any of the activity that we’ve heard about today. Licensing boards can’t deal with issues of fraud,” Head continued.

The committee also heard testimony neither for nor against the bill from Carl Chieten, a representative of the Home Builders and Remodelers Association of Maine, and Matthew Marks of the Association of General Contractors of America, Maine.

Chieten said his group’s members were divided over support of the bill.

“Some welcome the ability to legitimize the craftsman and building scientists who are successfully building in Maine. Some question the purpose of a builder registration program and if it is truly suitable to protect consumers,” Chieten wrote in testimony submitted to the committee.

“Another challenge, it appears if you have a friend, relative or neighbor who offers to help (undertake) and you pay them it would be a violation,” Marks wrote in his testimony.

A Canine Day on the Dentist’s: North Carolina Regulates Pups in Dentistry