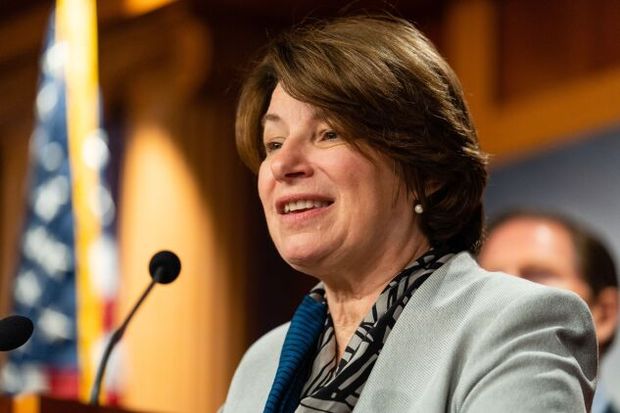 Efforts to get into big tech have gained momentum in recent weeks. Senate Majority Leader Chuck Schumer (DN.Y.) pledged a floor vote for the bipartisan American Innovation and Choice Online Act (S. 2992), which would restrict tech companies’ ability to prioritize their own products. Separately, lawmakers from both sides of the aisle have come up with a privacy proposal after years of stalled talks.

Some lawmakers say tying the two efforts to ensure passage before the August congressional recess is a bad idea.

“This bill stands on its own and we were promised a vote,” antitrust bill sponsor Sen. Amy Klobuchar (D-Minn.) said at a press conference Wednesday. She said more changes could arise and conversations are ongoing, but she wouldn’t allow for a “weak bill.”

“I am a big supporter of Senator Cantwell’s work and I think we should have a privacy bill,” said Klobuchar, who sits on the Commerce committee. “But there is not yet a privacy bill that has even come before the Commerce Committee.”

representative David Cicilline (DR.I.), sponsor of the House version of the antitrust bill, said there is “tremendous” support for privacy legislation in the House “but that’s on a very different timeline.”

The House Energy and Commerce Committee’s consumer protection panel will hold a hearing on the bipartisan privacy proposal June 14.

Syd Terry, the chief of staff to consumer protection subcommittee chair Rep. Jan Schakowskysaid at a meeting with progressive groups last week that “privacy should not slow down antitrust, and we want antitrust legislation on the floor the minute that it’s ready,” he told Bloomberg Government.

Meanwhile, others are holding out hope that both can run on parallel tracks.

“The exposure and threat to children and young people in America by social media companies should alarm all of us. At the same time, the work that Senator Klobuchar and others are doing in the area deserve attention and support,” Sen. Ben Ray Lujan (DN.M.), a member of the Commerce Committee, said. “There is no reason in my mind why they should not move on a parallel basis.”

Sen. Elizabeth Warren (D-Mass.), who has introduced her own antitrust legislation but committed to voting in favor of Klobuchar’s, said it is not an “either/or” decision.

“Privacy is important but breaking up the stranglehold of a powerful monopoly is also crucial,” Warren told Bloomberg Government.

Wicker questioned whether lawmakers really had to chose, contending “excellent movement” has been made on privacy and saying that he hopes to get Cantwell’s support.

To contact the reporter on this story: Maria Curi in Washington at mcuri@bloombergindustry.com

To contact the editors responsible for this story: Sarah Babbage at sbabbage@bgov.com; Anna Yukhananov at ayukhananov@bloombergindustry.com