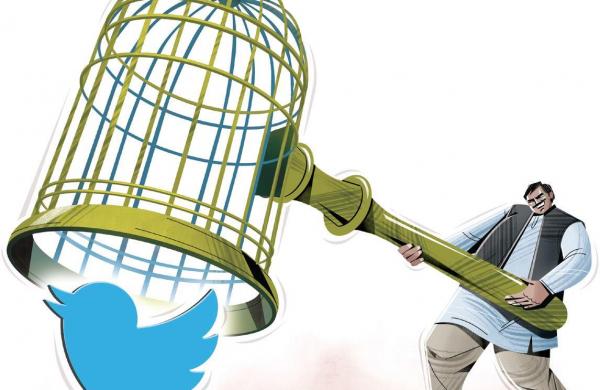 The way things played out between Twitter and the Union government, it seemed like we were going down the road to Nigeria. A few days ago, the Nigerian government shut down the popular social media site because an “offensive” tweet from President Muhammed Buhari had been deleted. Dictators are weird!

Something similar happened in India last month. BJP spokesman Sambit Patra’s tweet about a congressional “toolkit” slandering “government performance” (or lack of it) in relation to the Covid devastation was tagged as “rigged media” by Twitter. The Ministry of Electronics and IT (Meity) jumped into Patra’s defense. A threatening squad of Delhi police also ended up in the company’s Gurugram office.

Twitter received a “final notice” for failing to adhere to the new information technology rules (intermediary guidelines and code of ethics for digital media) of 2021 by not appointing compliance officers. On May 27, Twitter accused the Indian government of “dangerous attacks that are incompatible with open, democratic principles”. The government, in turn, warned of “consequences”.

The situation was dangerous for Nigeria, but Twitter pulled back just in time. The company has appointed a Nodal compliance officer and resident complaints officer and will update the government on its compliance in a week.

Tables have spun on social media

The immediate crisis appears to be over, but the deeper problems remain. Internet and digital platforms have developed into powerful tools for e-commerce and communication over the past two decades. Social media has opened the floodgates of creativity and all of the problems that come with it. The old, outdated media of print and broadcasting are too structured and, like all stationary facilities, are susceptible to interference from governments and private owners.

In comparison, digital platforms have become inexpensive and the “voice of the voiceless”. The government in India and everywhere else has not been too happy with the move of media and communications to the internet. The Department of Information and Broadcasting (I&B) has kept printing publishers and broadcast groups tightly on leash through its control network – the Press and Registration of Books Act of 1867 and the Cable Television Network (Regulation) Act of 1995 and the like.

Digital publishing, on the other hand, was hard to pin down because it doesn’t respect borders; It doesn’t take clunky physical hubs to work from there either. The Vajpayee government in 2000 promulgated the Indian Technology Act and the Intermediary Guidelines Rules in 2011. However, these were more intended to set up some kind of electronic administration and to expose cybercrime. Digital “intermediaries” remained largely unaffected. One reason social media has escaped the long arm of the censors for so long is that it was used as a weapon by the right to help the BJP juggernaut win elections and stay in power.

All of this has been well documented by Swati Chaturvedi in her famous book “I Am a Troll: Inside the Secret World of the BJP’s Digital Army”. The author, who once worked for the BJP, revealed how the Sangh Parivar used volunteers and paid staff to “constantly spread hateful tweets and conspiracy theories and defame journalists”.

The tables have turned lately and the pro-establishment trolls are now on the run. The demonetization in 2017, the anti-CAA movement in 2019 and now the mismanagement of the Covid-19 pandemic have sparked a backlash and changed the balance of power on social media. The government has taken heavy artillery from everyone from Greta Thunberg and Rihanna to student armies.

The challenge of the new code

Now that the shoe is on the other foot, there is a scramble to enforce information technology intermediary guidelines and keep Twitter in check. Isn’t it telling that the Indian version of Twitter Koo, which was founded by some Bengaluru tech freaks in March last year and promoted by government ministers, has now been welcomed with open arms by Nigerian President Muhammed Buhari? The intermediary guidelines are presented as a neutral self-regulation regime for OTT platforms as well as social and news media sites.

In fact, they aim to cripple free communication. The new code prohibits these platforms from disclosing information that “violates social norms, is immoral or defamatory” and requires them to block such information within 36 hours of being asked by a government or court decision. “The intermediary may not publish information that runs counter to the interests, unity, integrity and sovereignty of the state.” The powers to block content are draconian.

The guidelines state that authorized officers can investigate digital media materials in an emergency and the Secretary of the Department of I&B can issue an injunction blocking the use of such content. The new regulations require that the “intermediary” reveals “the primary information provider” at the request of the government. It’s about the “end-to-end encryption” of WhatsApp! For this reason, WhatsApp has taken the Delhi High Court to the new code for trampling on the fundamental right to privacy.

Carnatic singer TM Krishna has also challenged the constitutional validity of the new IT rules before the Madras Supreme Court, arguing that they are “illegal” and that go beyond the Information Technology Act of 2000, soon discover that the mind, once im Is free, can no longer be forced into the bottle.

THE NEW RULES OF THE GOVERNMENT AND THE CONTROVERSY THEREOF

The government’s new social media rules require instant messaging apps to track the origin of a message if the authorities require it to do so.

WhatsApp, which is owned by Facebook and has consistently opposed diluting encryption on its platform, has taken the government to court, stating that the new rules violate the right to privacy of Indian users.

how anti-vaxxers, conspiracy theorists, and the far-right got here collectively over…