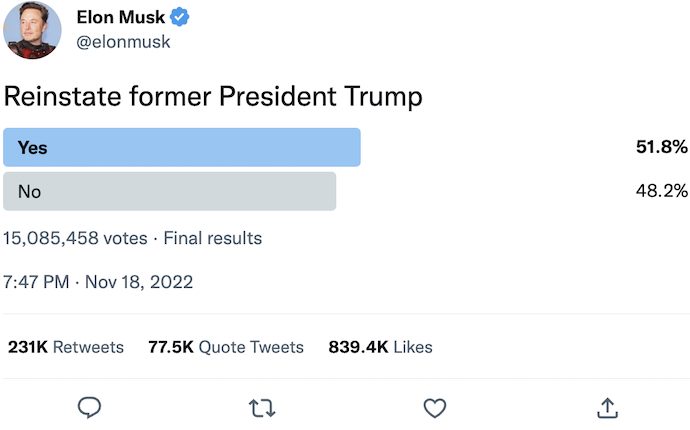 Elon Musk‘s messy purchase of Twitter led to countless stories about staff layoffs, resignationand the platform’s survival. Well over a month later and the media and public are still fixed on the sale and have ignored the tremendous threat the sale poses to the safety of American user data.

President Trump’s Twitter status receives more attention than the potential exposure of identifiable information or Musk’s extensive business ties with foreign governments. Unfortunately, the years-long saga surrounding Chinese ownership of tik tok has taught us nothing about the danger of foreign influence and investment in social media platforms. Sensitive and private data of US citizens remains susceptible to manipulation overseas, threatening both personal and national security.

The US government has the responsibility to protect America and Americans. It should ban all foreign ownership of social media platforms and require thorough investigations of potential purchases by US citizens. Current policy leaves the most consequential communication platforms in the world vulnerable to outside control. Preventable loopholes permit billionaires with foreign business ties to dictate technology policy. Inadequate regulation causes irreparable harm to US citizens, undermines American values, and threatens democratic processes.

The Committee on Foreign Investment in the United States (CFIUS) reviews Foreign investment in American companies. In 2018, Congress strengthened the committee’s jurisdiction over technology, infrastructure, and data companies. In a 2022 executive orderPresident Biden reiterated the importance of reviewing deals involving access to sensitive information.

However, the committee’s mandate failed to address current challenges. CFIUS could not proactively review the sale of Twitter to an American citizen who secured significant financing from individuals and entities in Saudi Arabia, the UAE, China, and Qatar. Nor could it evaluate Musk’s extensive connections to China through his ownership in Tesla that leaves him dangerously susceptible to influence by foreign officials.

Prohibiting foreign ownership will reduce disinformation from spreading across social media. Disinformation is just as, or more dangerous than conventional weapons in our technologically advanced society. These platforms can reach millions of people in seconds. Foreign interference has already inflicted immeasurable damage on our nation, as documented in the well-known Russian campaign to undermine our presidential elections.

Prohibiting foreign ownership will protect American businesses. A lack of foreign capital will increase the competitiveness of US-owned companies. Domestic firms will fill a funding vacuum for platforms focused on technological innovation, resulting in lucrative opportunities for employers and employees. Foreign entities will no longer profit as they promote lies, foster hate, sow division, and undermine democracy at home and abroad.

Prohibiting foreign ownership will safeguard the personal and identifiable information of American citizens and increase data privacy. Foreign individuals, entities, and governments will no longer have easy access to existing or future data available at private companies. Bad actors will have a harder time obtaining user information for nefarious purposes.

This policy would not alienate our key allies. The EU, UK, and Japan already grasp the importance of reviewing foreign direct investment in technology companies with potential ramifications for national security. Our cooperation with them on this important topic would strengthen our partnerships. Narrowly focused legislation would also not reduce US competitiveness in other industries or foreign markets. Focusing on specific areas affecting national security would not unreasonably burden American companies or unnecessarily impede private business transactions.

Banning foreign ownership of social media platforms will protect national security and safeguard the personal data of US citizens. Twitter and TikTok are two of the world’s most influential communication platforms. Both serve as a significant source of information to users and transmit material to mass audiences. Almost one quarter of American adults use Twitter, including over 40 percent of young adults. TikTok has more than 136 million users in the United States. It is tragically obvious that reactive measures are too little too late – and leave us at risk. President Biden and Congress must take proactive measures to control technology policy to protect national security and personal security – to ensure a safer future for America and all Americans.