A touring alien from a galaxy far, far away is an avid Instagram user. Her Instagram Feed is dominated by:

She logs in, scrolls through her feed gently — catching up with friends and family, keeping pace with general news in the galaxy, and sometimes taking a moment to catch up on an interesting science fiction short story.

After having caught up, she switches to the explore tab. She loves this tab as well. It has the right mixture of surprise and delight for her. She spends quite a lot of time engaging with the content. But, every once in a while she has an aha moment. She finds an account she actually wants to follow. Today, she found that slightly niche space travel magazine she wants daily updates from. This act of following increases the amount of content in her feed, and since the content is more personalized, she finds it more valuable.

This and many other such typical user stories inspired us to ask the following questions:

The Home Feed Ranking System ranks the posts from the sources you follow based on factors like engagement, relevance, and freshness. On the other extreme lies the Explore Ranking System, which opens you up to many other public posts which might be relevant and engaging to you. Could we find a middle ground and design a ranking system which shows you posts from accounts you do not follow and yet feel like you crafted them yourselves?

In August 2020, we launched Suggested Posts in Instagram to achieve this objective, which currently show up at the end of your feed. Here’s how we designed this marriage of familiarity and exploration.

Before we dive into the details of the machine learning system it is necessary to state the design principles which shall guide us along the way like a north star. “Feels Like Home.” Meaning, scrolling through the End of Feed Recommendations should feel like scrolling down an extension of Instagram Home Feed.

Typical, information retrieval systems have a two-step design: candidate generation and candidate selection. In the first step of candidate generation, based on a given user’s explicit or implicit interests we fetch all the candidates that a user could be possibly interested in. This is a recall-heavy stage. In the second stage of candidate selection, typically a more heavy-weight ranking algorithm works on these candidates and selects the best subset that is finally shown to a user. In real systems, these two stages could be divided into many subsystems for better design and control. Based on this understanding we are ready to dive into the design of the Suggested Posts ranking system.

Let us say our touring alien follows a tech magazine which focuses on spaceship design. She regularly likes their content and comments on it. This provides us with an implicit signal that she might possibly be interested in a similar genre of tech magazines. Following this line of thought, we can enumerate all such candidates of interest algorithmically based on engagement and relevance.

Let’s dive deeper. A user’s activities on Instagram helps us in building a virtual graph of their interests as shown below. Every node in this graph can now be a potential seed. Well, what is a seed? A seed is an author or media that one has shown explicit interest towards. Each seed can now be used as an input in our K-nearest neighbor pipelines which output similar media or similar authors. These KNN pipelines are based on two classic ML principles: 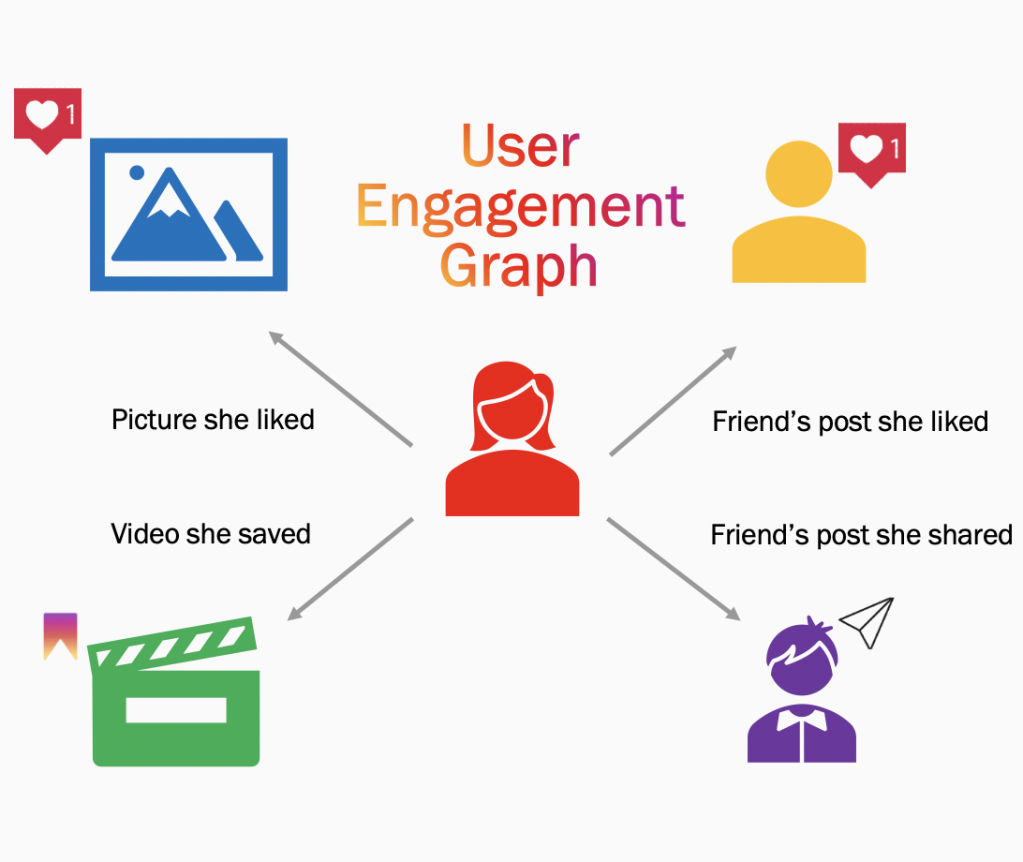 We at Instagram have developed a query language to quickly prototype sourcing queries (also referenced here). This leads to high-speed iteration while designing and testing new high quality sources. Here is a sample query:

Many new (and some seasoned) users may not have enough recent engagement on Instagram to generate a big enough inventory of candidates for them. This brings us to the familiar situation of dealing with a cold start problem in recommendation systems. We deal with the problem in the following two ways.

We rank a given post based on many factors of engagement and aversion which act as labels in our ranking pipeline. These include positive engagement factors such as like, comment, and save; and negative factors such as not interested and see fewer posts like these. We combine the probabilities learned for these respective labels in a user value model which is a log-linear model of the following form.

The weights are tuned using a) offline replay over user sessions and b) online Bayesian optimization. We tune these factors and weights frequently as our system evolves.

As far choice of model classes are concerned, we use point-wise classification algorithms which minimize cross-entropy loss:

We also use list-wise session based algorithms such LambdaRank which minimize the NDCG loss directly.

The overall architecture and hyperparameters are tuned frequently during training, offline replay, and online A/B tests. Additionally, depending on the task, we experiment with multi-stage ranking and distillation models as and when necessary.

We use a plethora of features to make our models increasingly intelligent and efficient. We have listed some of them below:

The above list is just a snapshot and is neither complete nor comprehensive. We use appropriate selection mechanisms and A/B tests to add or subtract more features as needed. We ensure the model output’s distributional robustness by frequently calibrating our models to a standard distribution.

We will now turn our attention to the implementation of our primary product principle, “Feels Like Home”. The are some of the steps we take to ensure suggested posts feel like a continuation of the Home Feed.

The suggested posts recommendation system was designed on a bedrock of subjective design principles rather than purely objective metrics such as ROC-AUC and NDCG. Overall, we are committed as a team to deliver a personal, relevant, useful, and curation-worthy feed which prioritizes long-term quality of the product. If you want to learn more about this work or are interested in joining one of our engineering teams, please visit our careers page, or follow us on Facebook.