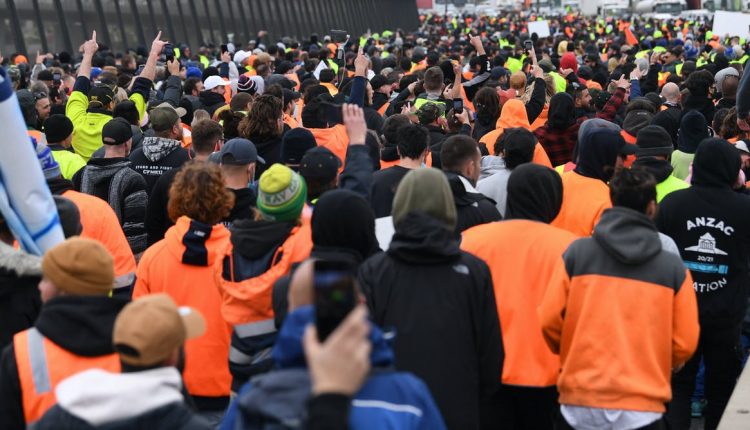 how anti-vaxxers, conspiracy theorists, and the far-right got here collectively over COVID

Scenes of protesters dressed in reflective vests shouting anti-vaccination slogans dominated the news this week. As the ABC reported:

Some of the gathering held up a banner reading “Freedom” while others sang the national anthem and sang “f *** the jab”.

Some attacked union offices and drew criticism from officials such as ACTU boss Sally McManus, who described the protests as “staged by violent right-wing extremists and anti-vaccination groups.”

These images may shock some, but for researchers like me – researching far-right nationalist and conspiracy movements and exploring the online spaces these people organize themselves in – these scenes came as no real surprise.

Right-wing nationalists, anti-Vaxxers, libertarians and conspiracy theorists have come together over COVID and taken advantage of the anger and insecurity in some parts of the community.

They seem to have found fertile ground, especially with men who feel alienated, fear for their jobs, and spend a lot of time at home scrolling social media and encrypted messaging apps.

The latest on a continuum

It is important to see what happens to these protests as part of a continuum, rather than a series of unrelated incidents. This week’s protests are related to anti-lockdown protests in 2020 and earlier this year.

It was initially limited to the conspiracy theorists and anti-Vaxxer crowd. Some were just annoyed by bans, but most of the planning talks on the internet were conducted by anti-Vaxxers and QAnon activists.

These movements thrive on fear, anger, a feeling of alienation, a distrust of governments and institutions. It’s really no coincidence that this is most prevalent in Melbourne, considering what this city has been through with lockdowns.

It has really gained momentum in the last year and has been infiltrated by far-right groups more recently.

Read more: Far right groups have used COVID to expand their presence in Australia. Here are the ones you need to know

The extreme right are skilled recruiters

If you look back two years ago, anti-Vaxxers were a tiny minority. Their size and influence on the internet have grown significantly.

During my research, I have observed how the extreme right consciously appropriates the language of the anti-Vaxxers, the conspiracy movements and tries to exploit their anger and distrust.

I spend a lot of time with the encrypted messaging groups used by these groups and in the online areas that they organize themselves into. I’ve seen the same names pop up and right-wing extremist or right-wing extremist National Socialist iconography being used with increasing frequency.

It’s almost like grooming. The extreme right is much more capable of recruiting than we think they are. You have found an audience that is angry, frustrated and looking for the guilty party.

This is particularly the case with young men, who are increasingly attracted to right-wing nationalism and make up the majority of the demonstrators. Victoria Police Commissioner Shane Patton said the majority of protesters at the protests on Saturday were men aged 25 to 40 who had come with violent intent.

Many of these groups share similar beliefs: that there is a cabal of politicians and elites that oppress you. This freedom is in jeopardy that you have to stand up for the freedom that a wealthy and unelected ruling class controls you.

COVID – with all the associated fears, insecurities, bans, police and employment consequences – has helped bring these groups together.

The online commentary on COVID-19 has provided a recruiting tool for far-right groups, connecting those interested in alternative wellness, anti-vaccination and anti-authority conspiracy theories with white supremacist ideologies.

There is strong historical hostility to trade unions (as the vanguard of the political left) among the extreme right. It would be insincere to view the far right as an unintelligent thug. They are learned in the history of National Socialism and Fascism and the requirements for its rise.

There was a really confident effort among the demonstrators to portray themselves as artisans and workers. Some saw protest organizers encourage people to wear warning clothing at these rallies.

It is important to note that the construction industry and the union movement in general are incredibly diverse and there will be different and competing views on vaccines, masks and bans.

Some of these protesters are actually trades, and some may not. Some are union members and some are not. But the more general point is that there is a group of people who are incredibly angry about the situation they find themselves in, and resentments prove to be fertile terrain for organized groups.

Where to from here?

This isn’t a simple knot, but there are three main approaches that I think would really help.

The first is that we really need to get people back to work. That is critical. People’s self-esteem and livelihood are tied to work and the ability to bring food to the table, stay busy, and stay socially connected (which often happens through work).

By ensuring safe jobs for people, you are really taking away one of the main reasons for anger, resentment (and too much time to scroll social media) that drives people to extremism.

Second, politicians need to think carefully and quickly about what they can do to restore confidence in them, in the government and in our institutions. Politicians cannot hide behind press conferences and press releases to get their message across. You need to get out and build trust, face to face with the community. Of course this has been limited by the lockdown, but this work is urgent and important. Politicians need to lead again and build relationships with the community.

Read more: To stop right-wing extremism in Australia, we must face the hate ecosystem

The Resolution to Au Pairs’ Well being Protection Gaps Could Be Easy: ACA Plans