Fb kowtowed to conservatives and bought nothing in return. 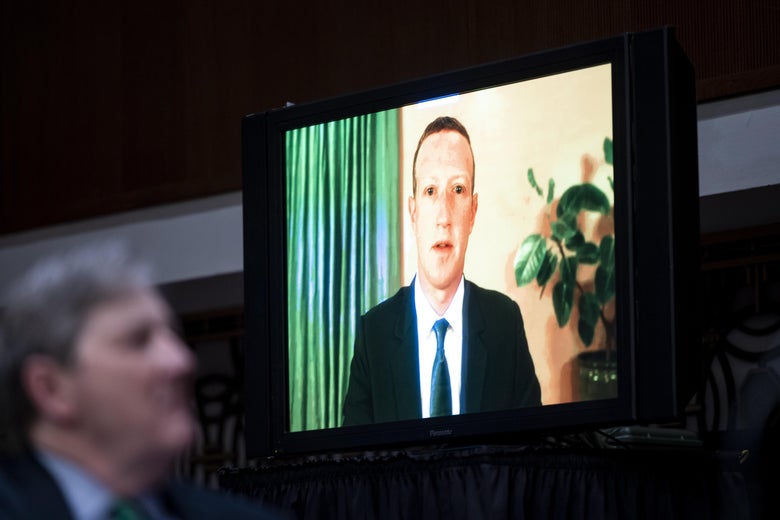 Facebook has spent much of the past four years kowtowing to conservatives, treating right-wing news outlets with kid gloves even as they flouted its rules and spread disinformation, while bending over backward to avoid offending the Trump administration. By almost all accounts, the company hoped that playing nice would stave off any kind of serious regulatory crackdown on its business, or at least spare it some angry presidential tweets (while, of course, keeping Republican eyeballs glued to its news feed).

This strategy seems to have failed rather badly. On Wednesday, the Federal Trade Commission, along with 46 states and D.C. and Guam, filed a massive pair of antitrust suits accusing Facebook of illegally monopolizing the social-media market by buying up potential rivals such as Instagram and WhatsApp while freezing out third-party developers from its platform unless they promised not to create competing services. The government is seeking to break the company up as punishment. Unlike the antitrust suit the Justice Department launched against Google earlier this year, this does not appear to be a rushed PR play—it’s a concerted, full-frontal assault on Mark Zuckerberg’s empire.

And Republicans are very much along for the charge. The FTC’s GOP Chairman, Joseph Simons, whom Trump appointed in 2018, voted with two of his Democratic colleagues to authorize the suit. Among the states that have joined the effort, almost as many are represented by a Republican attorney general as a Democrat. How did Facebook’s efforts to court conservatives bear so little fruit?

It certainly wasn’t for lack of trying. Facebook’s efforts to placate Republicans, which have by now been extensively documented , began in earnest during 2016, after Gizmodo published an investigation revealing that human moderators had “routinely suppressed” conservative content on its now-defunct trending news module. Though it wasn’t necessarily evidence of liberal bias—many of the suppressed pieces may have just been misleading or inflammatory—the story caused an uproar in right-wing circles; GOP senators announced an investigation, and Zuckerberg attempted to do damage control by sitting down for a meeting with conservative commentators like Tucker Carlson and Glenn Beck.

Since then, the company has been hyper-focused on deflecting accusations of anti-conservative bias, even if it meant allowing propaganda and trolls to flourish on its site. Much of that effort has been headed by Joel Kaplan, Facebook’s head of global public policy. A Republican veteran of the George W. Bush administration and close friend of Supreme Court Justice Brett Kavanaugh, who sat behind the judge during his confirmation hearing, Kaplan is widely seen as the company’s chief defender of right-wing media interests. In December of 2016, he reportedly fought against immediately shutting down dozens of pages promoting (actual) fake news stories, because it would disproportionately hurt conservatives. He later neutered an effort to make Facebook less polarizing, called project “Common Ground,” because the changes engineers proposed would have clamped down on spammy and incendiary right-wing content. When Facebook sought to reduce the amount of posts by publishers in users’ news feeds, and increase the number by families and friends, he objected to the changes, because they would have gutted traffic for rabidly conservative sites like Breitbart, the Daily Caller, Daily Wire, and Gateway Pundit. Engineers went back and tweaked the algorithm so those sites would lose fewer readers, while well-regarded progressive news operations like Mother Jones would lose more.

As one former Facebook employee told Popular Information last year, “Any time there was an issue with Breitbart or Daily Caller, Joel made the decision, and he always acted to protect them.”

While Facebook kept traffic flowing to the right-wing fever swamps, it also made direct outreach efforts to the conservative movement and its preferred news outlets. It hired a former Republican senator to investigate whether the site was biased against conservatives (the report didn’t find any evidence). It caused a medialand controversy when it added the Daily Caller, the site founded by Tucker Carlson, to Facebook’s roster of fact checkers, despite its reputation for disseminating gutter clickbait (the outfit had just gotten into trouble for circulating a fake “nude selfie“ of Alexandria Ocasio-Cortez). Zuckerberg himself has made a habit of hosting dinners at his home for conservative commentators like Daily Wire founder Ben Shapiro, whose site is one of the most popular on Facebook.

The platform has also been willing to overlook its own rules when conservatives appear to break them. Last year, Popular Information revealed that the Daily Wire seemed to be juicing its traffic by promoting it via a network of 14 centrally controlled sock-puppet pages, some of which purported to be independent news sites. This ostensibly violated the platform’s rules for “coordinated inauthentic behavior.“ Facebook had previously punished progressive activists for using similar tactics, but decided to let the Daily Wire’s promotional pages stay up.

Conservative media might not quite dominate Facebook the way some of its critics have suggested; data from the analytics firm NewsWhip, for instance, shows the top performers on the platform include mainstream news sites like CNN, the New York Times, Washington Post, and NBC, as well as conservative outlets like Fox News and the Daily Wire. But Facebook’s permissiveness has allowed a number of sites known for spewing hate and paranoia—never forget Breitbart once had a section tagged “black crime“—to prosper.

At the same time that Facebook has done its best to make itself a hub for conservative vitriol and conspiracy theorizing, the company has also made efforts to court the White House and Republican politicians directly. Board member Peter Thiel was famously one of Donald Trump’s most prominent backers (although he distanced himself during the 2020 cycle). But Zuckerberg himself has gone on a charm offensive, visiting the president at Oval Office and dining with him in secret one night in 2019, when he reportedly congratulated Trump for being “number one on Facebook.“ The CEO kept an “open line“ with Trump’s son-in-law and advisor Jared Kushner, as well, often discussing Facebook policies on WhatsApp.

In public, Zuckerberg has also become an increasingly maximalist advocate for free speech on social media, rebuffing progressives who’d like platforms like his to rein in hate speech and misinformation. “I know many people disagree, but, in general, I don’t think it’s right for a private company to censor politicians or the news in a democracy,“ he said during a high-profile speech at Georgetown University last year, which won praise from GOP House Minority Leader Kevin McCarthy and Zuckerberg’s dinner-companion Shapiro, among other conservatives.

The upshot of that philosophy is that, compared to its competitors like Twitter, which this summer started tagging Trump’s online ravings with disclaimers about misinformation and sometimes obscuring his posts outright while limiting their ability to be shared, Facebook has taken a far more permissive stance when it comes to what that the president can publish. This came to a head during the George Floyd protests this summer, when the president posted a message warning demonstrators that, “When the looting starts, the shooting starts.“ While Twitter hid the message from view, Facebook chose to leave it up, a decision Zuckerberg personally defended at a company town hall. (Facebook’s policy is to leave up “primary source speech“ from major political figures.) Facebook, to its credit, has removed some misinformation about the coronavirus from the president’s pages. It also labeled some of his misleading posts about November’s election results with disclaimers, though didn’t stop them from being shared. Overall, its policy has been to remain deferential toward the White House.

And yet, Facebook has earned virtually no good will at all from conservatives movement, which has continued to lob flimsy accusations of anti-conservative discrimination at the company. “There are a great many Americans who I think are deeply concerned that that Facebook and other tech companies are engaged in a pervasive pattern of bias and political censorship,“ Texas Sen. Ted Cruz told Zuckerberg at a hearing in 2018.

The list of complaints isn’t exactly extensive, and some examples hew closer to reality than others. Conservative media personalities like Trump cheerleaders Diamond and Silk have complained about supposedly being mistreated by Facebook. Some on the right have railed against the platform’s efforts to control hate speech, such as when it banned a group of figures including Infowars founder Alex Jones and anti-Muslim activist Laura Loomer; that move inspired Carlson to warn on Fox that Zuckerberg could “singlehandedly make our First Amendment irrelevant.“ There was an incident in which Facebook accidentally removed some pages from Catholic organizations (it restored them and apologized), and anti-abortion activists complained that an ad policy that barred the depiction of tubes connected to the human body discriminated against some of their content (Facebook tweaked the policy). Facebook and Twitter also managed to infuriate the president and many Republican lawmakers when it decided to throttle the New York Post’s initial story about Hunter Biden this October, because they had been warned it might have been the product of a hacking operation.

Thanks to cases like these, Republicans have continued to haul Zuckerberg and other big tech executives up to Capitol Hill, in order to threaten them with antitrust actions and regulation over their purportedly unfair moderation policies. Trump in particular has become obsessed with repealing Section 230 of the Communications Decency Act, the valuable law that shields platforms from legal liability over what their users post. Apparently those dinners didn’t get Zuckerberg very far.

So terrible that Facebook and Twitter took down the story of “Smoking Gun” emails related to Sleepy Joe Biden and his son, Hunter, in the @NYPost. It is only the beginning for them. There is nothing worse than a corrupt politician. REPEAL SECTION 230!!! https://t.co/g1RJFpIVUZ

To some extent, this has always looked like standard conservative ref-working. Republicans spent decades accusing the mainstream media outlets of bias, partly in order to get more favorable coverage. They’ve just updated the script to focus on social media giants. And with Facebook, it has clearly worked; after all, the platform has worked overtime to address conservatives’ concerns, and make it a welcome place for their favorite writers. The problem for Facebook is that there’s really no such thing as getting half-pregnant with the conservative movement. For the most part, institutions are either a friend in its eyes, or a foe. And Facebook has done just enough to tick conservatives off in order to nullify all its efforts at making them happy. Facebook may have thought it was paying into a protection racket. But it didn’t actually buy any protection.

Readers like you make our work possible. Help us continue to provide the reporting, commentary, and criticism you won’t find anywhere else.

Has TikTok toppled YouTube as the largest creator platform?

Earlier than taking a look at massive tech, govt should forged off its ideological…