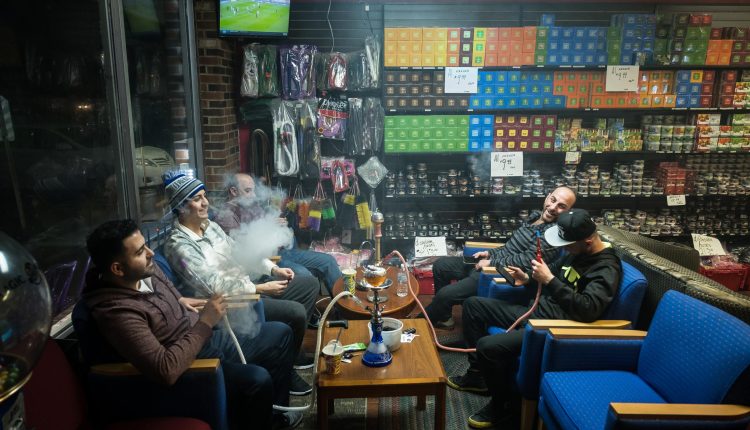 
LOS ANGELES — In 2019, local business owners began gathering regularly at Arnie Abramyan’s hookah lounge on the outskirts of Los Angeles to fight a proposed statewide prohibition on the sale of flavored tobacco.

From the heavily Armenian neighborhood of Tujunga in the foothills of the San Gabriel Mountains, Abramyan and other hookah shop and cafe owners began spreading the word that the ban, prompted by a burgeoning epidemic of e-cigarette use among teens, could put them out of business and extinguish a beloved social ritual that many feel is part of their heritage.

“We were going to be collateral damage,” said Abramyan, now president of the National Hookah Community Association.

As their movement grew, the business owners hired a lobbyist and traveled to Sacramento to meet with lawmakers. They posted YouTube videos on “the history and centuries-old tradition” of smoking the water pipes popular in the Middle East. Their work paid off: State lawmakers passed the ban in August 2020, which outlawed the sale of flavored tobacco, including menthol cigarettes — but exempted premium cigars, loose pipe tobacco, and the “flavored shisha tobacco product” used in hookah pipes.

It never went into effect. Big Tobacco quickly launched a referendum drive and gathered enough signatures to bring the issue to voters. This month, Californians will decide — via Proposition 31 — whether to uphold or block the law, which would make it illegal for brick-and-mortar retailers to sell flavored cigarettes, e-cigarettes, and other flavored tobacco products. Sales of gums or gummies that contain nicotine and are not approved by the FDA would also be prohibited.

If the law is upheld — recent polling indicates that a majority of likely voters support it — California would become the second state to rid stores of both flavored vapes and menthol cigarettes, which have helped hook millions of Black and Latino smokers since tobacco companies began marketing them in inner-city neighborhoods half a century ago.

The question of why California has granted hookah smokers an exception while banning menthol cigarettes, the choice of 85% of African American smokers, has sparked a debate about which tobacco products — if any — merit protection. Until recently, efforts to outlaw menthols had failed in the face of aggressive tactics by tobacco companies, which have staved off billions in losses by equating such bans with racism and the war on drugs.

Anti-tobacco groups warn that this strategy has become a model for fending off government interference. They decry the hookah exemption as the latest example of business successfully using identity politics to keep profiting from a deadly product.

“Hookah has been given a pass for no scientific reason,” said Carol McGruder, co-founder of the African American Tobacco Control Leadership Council. McGruder, who has spent years waging war against tobacco companies for their “predatory targeting” of Black communities with menthol cigarettes, said hookah smoking has become increasingly trendy among Black youths.

Many young people mistakenly believe that hookah smoking is less harmful than other forms of smoking, but experts say tobacco smoked through water pipes is just as addictive as cigarette tobacco and contains similar cancer-causing tar, nicotine, and heavy metals.

“They bring out a beautiful antique hookah pipe and they say that hookah is all about family and community,” McGruder said. “But it’s all about money.”

Big Tobacco itself is assailing the hookah exemption, saying it proves that the law discriminates against Black and Latino smokers by banning menthol flavors, while giving “special treatment to the rich,” as an ad campaign paid for by the industry argues.

“Prop. 31 will increase crime and expand illegal markets, cut revenue for critical services and could backfire on the very communities its proponents say they want to help,” said Beth Miller, a spokesperson for the “No on Prop 31” campaign.

More than 360 municipalities, clustered primarily in California and Massachusetts, have restricted the sale of flavored tobacco products, including e-cigarette pods in kid-friendly flavors — strawberry, chocolate milk, and pink punch — which health officials say have provided a gateway to teenage smoking. Roughly half of the ordinances restrict menthol, while fewer than 20 — nearly all of them in California — exempt hookah tobacco and/or hookah bars.

In 2021, 80% of high school students and nearly 75% of middle school students who had used a tobacco product in the previous 30 days reported using flavored tobacco, the Centers for Disease Control and Prevention reported. In 2019 and 2020, an outbreak of vaping-related lung disease, known as EVALI, killed 68 people.

The vaping epidemic has given anti-smoking activists an opening to lobby against menthol cigarettes. Invented in the 1920s, their cool, minty flavor helped new smokers adjust to them more easily than non-flavored cigarettes, and the industry marketed them as a healthier option. In the 1960s, tobacco companies turned to the Black community, handing out free samples to hip, young “communicators” in barbershops and bars. Menthol cigarettes account for more than a third of the $80 billion U.S. cigarette market.

Reynolds American, the country’s largest maker of menthol cigarettes, including Newport, has battled menthol bans by giving money to the Rev. Al Sharpton’s National Action Network and other civil rights groups. When the New York City Council proposed a menthol cigarette ban in 2019, Sharpton cited the case of Eric Garner, a Black man who died in police custody in 2014 after he was stopped for allegedly selling single, untaxed cigarettes on the street.

But the success of these efforts came at a devastating price, public health experts say. African American men have the highest rate of new lung cancer cases in America, according to the CDC.

Earlier this year, the FDA announced a plan to ban sales of menthol-flavored cigarettes, a long-awaited move hailed by health officials and some Black leaders, even as they braced themselves for a protracted legal battle with the tobacco industry that could delay the ban for several years.

For years, anti-smoking activists have been focused on menthol, said Valerie Yerger, an associate professor of health policy at the University of California-San Francisco. “Nobody was focused on hookah,” she said.

But water-pipe use among young people has been on the rise in recent decades.

At Hookah battles across the United States and Europe, contestants compete to build the most elaborate water pipe, often to a hip-hop soundtrack. Elaborate water pipes, with their billowing puffs of smoke, are often prominently featured in rap videos.

“It’s just another way the industry has found to keep our young people addicted to these products,” Yerger said.

Hookah purveyors argue that blanket prohibitions endanger small-business owners, many of them immigrants, and threaten to erase a “rich cultural heritage” by effectively outlawing hookah pipes, which are often part of gatherings and celebrations for Arabs, Armenians, Persians, and others hailing from the Middle East. They reject the claim that their fight is only about money.

For Abramyan, smoking a hookah was an after-dinner, adult ritual his Iranian-born parents brought with them when they immigrated to America in the 1980s. The ornate water pipes are often several feet tall and take at least 20 minutes to set up.

“This is not something kids are smoking in the bathrooms at school,” he said. “We don’t want our kids to smoke, but why shouldn’t my grandpa be able to smoke his hookah in his backyard?”

Bible study groups and the local Rotary Club chapter regularly meet at his Tujunga hookah lounge, Garden on Foothill, which features outdoor gazebos for families and groups. “For Muslims who don’t drink alcohol, or people who don’t like to go to strip clubs, this is a safe space,” he said.

The shop he runs a few blocks away, Munchies Mart, sells handmade hookah pipes and tobacco in flavors such as Strawberry Lemonade, Orange Pop, and Agua Fresca, a far cry from the apple-soaked tobacco he remembers his Persian grandmother mixing in her kitchen.

But he said that communities often suffer when corporate interests “use cultural identity to market a product for mass consumption.”

“You go to any college town,” he said, “and the hookah bars are filled not with practicing Muslims, but with college-age kids who are going there to socialize, consuming flavors in bubble gum and cotton candy.”

Haven’t Seen Your Physician in a Few Years? You Could Have to Discover a New One