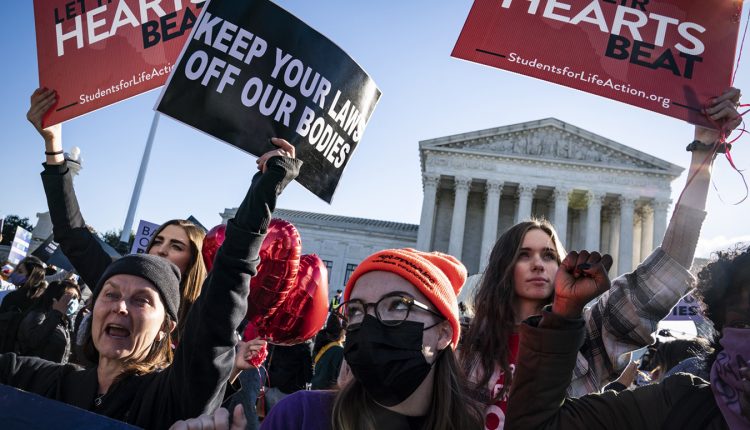 In the second-most anticipated abortion case of the year, eight justices on the U.S. Supreme Court ruled Friday that abortion providers can challenge a Texas law that has effectively banned most abortions in the state since it was allowed to take effect in September. But the court also ruled that the federal Justice Department could not intervene in the dispute, and it refused to block the law for now.

Nonetheless, the justices were sharply divided in their opinions on the case. The majority opinion in the Texas decision, Whole Woman’s Health et al. v. Jackson et al., did not directly address the fate of abortion rights in the United States. Rather, the conservative, anti-abortion majority on the court is expected to take on that larger question in a separate case out of Mississippi that was argued Dec. 1.

In fact, the majority opinion, written by Justice Neil Gorsuch, directly acknowledged as much. Whether the Texas law is constitutional “is not before the court,” he wrote. “Nor is the wisdom [of the Texas law] as a matter of public policy.”

A hint as to the coming showdown over abortion rights is included in a plurality opinion written by Chief Justice John Roberts — and joined by the three liberal justices. The Texas law, wrote Roberts, “has had the effect of denying the exercise of what we have held is a right protected under the Federal Constitution.”

The Texas law, known as SB 8, is similar to laws passed by several  other states over the past few years in that it bans abortion after fetal cardiac activity can be detected, which is usually about six weeks into pregnancy. That is in direct contravention of Supreme Court precedents in 1973’s Roe v. Wade and 1992’s Planned Parenthood of Southeastern Pennsylvania v. Casey, which say states cannot ban abortion until “viability,” about 22 to 24 weeks. The Texas law also makes no exception for pregnancies caused by rape or incest.

SB 8, however, varies from other state “heartbeat” laws because it has a unique enforcement mechanism that gives state officials no role. Rather, it leaves enforcement to the general public, by authorizing civil suits against not just anyone who performs an abortion, but also anyone who “aids and abets” an abortion, which could include those who drive patients to an abortion clinic or counsel them. Those who sue and win would be guaranteed damages of at least $10,000. Opponents of the law call that a “bounty” to encourage people to sue their neighbors.

Supporters of the law have said it was specifically designed to prevent federal courts from blocking the law, since no state officials are involved in enforcement and therefore are not responsible for it.

It was specifically that enforcement mechanism that the Supreme Court considered during three hours of oral arguments that were speedily scheduled on Nov. 1. The question before the justices was not directly whether the Texas ban is unconstitutional, but whether either the abortion providers or the federal government could challenge it in court.

In the end the court ruled that while the abortion providers could sue some, but not all, of the Texas officials included in their lawsuit, the Justice Department could not intervene. In a separate, two paragraph ruling, the court said the case brought by the federal government seeking to intervene, United States v. Texas, was “improvidently granted.”

The justices also noted that Thursday a state court in Texas held the law unconstitutional, but that case affects only roughly a dozen individual suits.

As she has been since the court first addressed the case last summer, Justice Sonia Sotomayor was scathing in her criticism. By allowing the Texas law to continue in effect, she wrote in a dissent, “The Court thus betrays not only the citizens of Texas but also our constitutional system of government.”

The case returns to the federal district court in Texas.

Lengthy Learn: The Blind Spots in Digital Coverage and Observe

I Write About America’s Absurd Well being Care System. Then I Acquired Caught Up in…