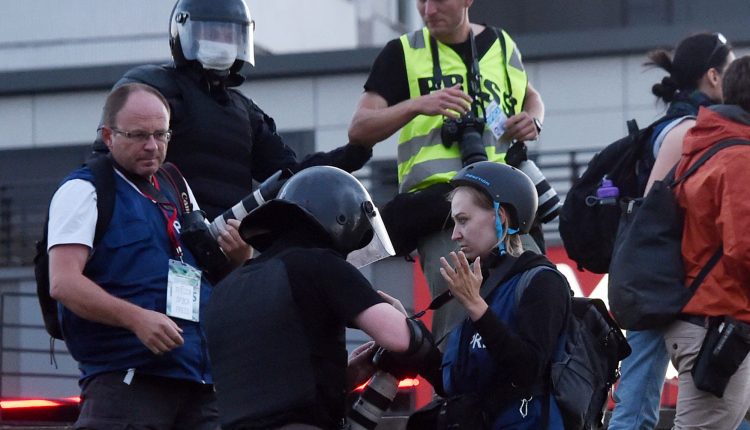 New York, May 4, 2021 – The Committee for the Protection of Journalists today condemned a number of amendments by the Belarusian parliament that could seriously affect press freedom in the country.

On April 21, the National Assembly, the Upper House of Parliament, passed changes to the country’s Mass Media Act and the Law on Mass Gatherings, which were passed by the House of Commons on April 16, according to news reports.

The legislation, according to news reports, the texts of the amendments and Aleh Aheyeu, a lawyer for the Belarusian Union of Journalists, includes a ban on reporting on unauthorized protests, restrictions on the establishment of media and other measures to restrict the freedom of the press, a local advocacy and trade group that spoke to CPJ in a telephone interview.

In order to take effect, the amendments must be approved by the Constitutional Court and then signed by President Aleksandr Lukashenko according to these reports. Aheyeu said the process was very opaque and it was unclear whether the bills were with the president or with the court to this day.

“The Belarusian authorities have systematically suppressed the remaining free votes in the country and now they want to change the law to further silence independent journalists,” said Gulnoza Said, program coordinator for Europe and Central Asia at CPJ. “The Belarusian government should not adopt restrictive new changes that would critically endanger journalism in the country and must stop prosecuting journalists once and for all for simply doing their job.”

The provisions in the amendments to the Mass Media Act include:

The amendments do not specify the penalties for violations. Aheyeu told CPJ that such penalties will be established when authorities interpret the changes and impose penalties based on the Criminal and Administrative Code.

The amendments to the Law on Mass Gatherings include a ban on livestreaming or otherwise reporting unauthorized protests in the country, which Aheyeu told CPJ in response to the cases of Belsat journalists Daria Chultsova and Katsiaryna Andreyeva, who were convicted in February for their protest reporting. The authorities claimed that the protests were “organizing”, as CPJ documented at the time.

“You have already been convicted of these allegations, and the regulation comes out post-facto to prohibit the mass media from showing the extent of the protests against the current authorities,” said Aheyeu. This amendment also does not mention any specific punishment.

“[If these amendments are enacted] Media working conditions in Belarus will deteriorate significantly and it will be more difficult for both Belarusian and foreign media to work in the country, ”Aheyeu told CPJ.

CPJ sent an email to the Belarusian National Assembly and contacted the Presidency Office through its official website for comment, but received no replies.

A Contributor’s Story with Aanand Kainth