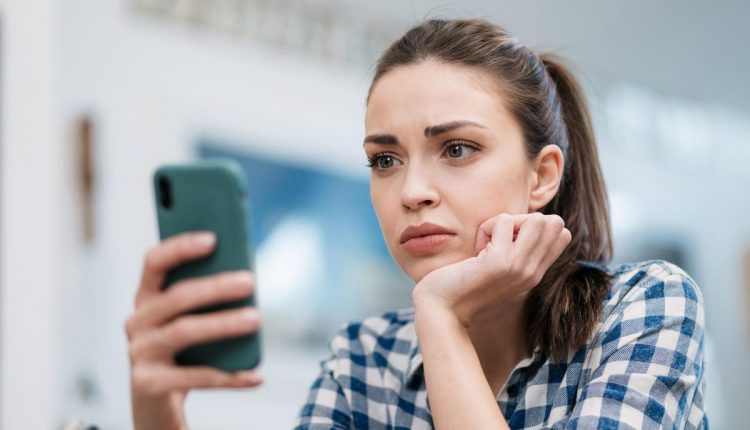 Close up of a depressed Caucasian young woman sitting at home, reading some bad news on her smart … [+] phone, feeling sad and worried

Anything goes mentality with any technology usually leads to two possible scenarios. One is that you experience incredible freedom of expression, an exchange of ideas that is healthy and productive. I have found some of the conversations on Reddit to be refreshingly unfiltered at times, with people saying what they really think. The other scenario is that you create a troll farm. They hunt you down and find you; then the pummeling starts.

When Donald Trump finally launches his new Truth Social platform (there’s a waiting list right here), I suspect there will be few safeguards and no content restrictions.

It’s too early to say whether the unfiltered exchange of ideas will lead to anything useful, or if the platform will descend into total anarchy, but I can predict a few outcomes based on what I’m noticing so far.

1. Only one side of the aisle will use it

Say what you will about Twitter and Facebook moving to the “left” and blocking people with voices that appear to lean right-wing, at least there is no initial litmus test to use them. I never had to answer any political questions when I signed up for a Twitter handle recently (an account for my new book, actually), and I’ve expressed plenty of viewpoints over the years. I’ve also complained endlessly about trolls and infighting. And yet, even though the trolls do run rampant, at least we’re all in the cesspool together. I don’t like the idea of ​​having social networks that are only for a specific segment of the population. That leads to a few challenges about viewpoints and only reinforcing things that might be suspect or even outright false.

2. There will be fights

From all that we know at this point, the network will be backed by Trump and even fuel future political maneuvers. What happens when we segment like that is the other side always finds a way to infiltrate the inner circle and break through any gatekeeping. We don’t even know if there will be gates, but it’s safe to say that any platform geared for one type of discourse will eventually attract those who don’t like those viewpoints and want to combat them.

3. It will help Donald Trump

Clearly, this is a network built by Donald Trump’s team, meant to help him gain more exposure, and designed to increase his popularity with voters. When I added myself to the waitlist just to see if I could test it, I started getting political texts almost right away. Again, we know the last few years after he was elected led to quite a bit of negative press, but at least it was press. I’m not sure how I feel about an entire social media network designed to increase the political cachet of one particular person, but it’s obvious that more exposure will be one outcome one way or the other.

Both Twitter and Facebook have been trying to police themselves. They know the next step after allowing too much freedom to abuse fellow users is that there will be mandates and other restrictions imposed on the platform by outside parties. Regulation is always the next step after a lack of policing. My guess is that Truth Social may launch with some fanfare, thereby attracting a sizable audience of Trump supporters. And the next phase will be garnering the attention of regulatory agencies, who will not want to play nice. It’s one thing for Twitter itself to block a user; it’s something quite different if a regulatory body tries to do that.

I’m predicting almost initial growth, the unfiltered exchange of “right-leaning” political views, then some regulation and government involvement, followed by…crickets. I don’t think anyone likes to see people getting pummeled all the time. I dont. If Truth Social explodes in growth and helps Donald Trump initially, then becomes a bastion of trolls and infighting, I suspect everyone will eventually grow tired of the negativity and bad press, eventually moving on. I guess we will all find out.

‘Each transfer scrutinized’: Fb’s rocky street to the metaverse | Meta